A Gesture of International Peace and Goodwill

Nobuo Fujita was the only Japanese pilot to bomb the U.S. mainland, dropping incendiary bombs near Brookings in September of 1942 during World War II.

A total of four bombs were dropped over two occasions with the intent of starting forest fires; however, due to damp conditions, little damage occurred. 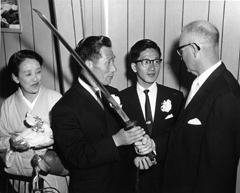 In 1962, the Brookings Jaycees invited Fujita to Brookings as an occasion of historical significance. During the visit, Fujita donated his Samurai sword, which had flown with him in the cockpit, to the City of Brookings as a gesture of international peace and goodwill.

Fifty years after the bombing, Fujita returned to the forest he once bombed and planted a little redwood tree, which he called a "symbol of friendship and peace."

Fujita was later named an honorary citizen and an ambassador of goodwill by the City of Brookings for his continued peace efforts.

For those with an adventurous spirit, it is possible to visit the bomb site, but it is important to note that the terrain is challenging.

From Brookings, cross over the Chetco River and take County Road 808 (South Bank Chetco River Road) to FS Road 1205 (known locally as the Mt. Emily road). Take 1205 to spur road 260. Parking is at the 1205 and 26 intersection. The trailhead for Trail #1118 is located on the south side of Road 1205, about 200 feet past the intersection. The one-lane road is unpaved. It is recommended for vehicles with four-wheel or all-wheel drive. Cell phone service will be limited. Once you have reached the parking area, there is a trail to hike. The trail is not fully accessible for people with disabilities. Hikers should carry drinking water. None is available on-site. The trail does include a few large coastal redwood trees.

An interpretive display marks the actual site of the bomb's impact.

The entire trip will take approximately one hour and fifteen minutes each way.

Inside the city limits of Brookings, there are two commemorative locations to visit.

A commemorative marker is erected inside the Botanical Gardens located at the corner of Chetco Avenue (Route 101) and North Bank Chetco River Road.

This institution is an equal opportunity provider